Following on from our recent article on the 50 Recruitment Stats about Diversity, we took the opportunity to speak directly with a number of women working in technology in the UK to get their views on how to encourage more women to get into tech and progress in their careers.

Download the PDF version of our survey responses – Women In Tech 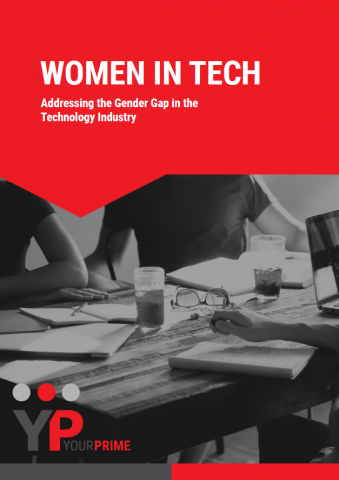 From our article, one of the stats highlighted was around salary. The average salary for women in tech is £59,209 compared with the average male salary of £78,599 – a shocking difference and one that is either pointing to men generally earning more for doing the same job, or that not enough women are being represented in the top paying roles.

We started by asking our community what they thought was the most difficult part about being a woman in the tech industry.

“Like many industries, dealing with the inherent male bias can be tedious. I believe newer companies have much more equilibrium in that respect.”

“There aren’t enough of us, a good balance of male and female is required to really get the best results but leadership teams in tech do tend to be majority male.”

If leadership teams are typically male, does that then reduce the likelihood of women being promoted by those teams into more senior positions – or is the issue a lack of women in entry-level roles to recruit from in the first place?

We also asked women in tech roles about whether they noticed a lack of women working in technology in general:

“I do notice a lack of women in certain areas of technology such as programming and senior positions.”

When we asked our respondents why they thought women were underrepresented in the industry, we got some interesting feedback:

“Yes, there are a lack of women in the technology industry, I think more needs to be done in schools to educate girls on the opportunities available in technology. There needs to be more focus on the professional services areas such as project management, business analysis etc. rather than traditional techie roles such as engineering and networking etc. which might not necessarily appeal to everyone.”

For both boys and girls at school age, there is probably a wider issue around students not being made aware of the wider range of roles available in technology – rather than just focusing on the most obvious roles such as programming, or the ones we hear about in the news regularly.

In our article, “What more can be done to increase the number of women in tech”, one of the issues highlighted at school level was the subconscious gender stereotyping of students, with learning providers inadvertently pushing girls away from exploring STEM roles.

When asked what issues were being faced by women in the tech industry, worryingly we received responses still relating to women not being regarded as equal to men.

“One of the issues for women is being taken seriously and being noticed.”

Another issue highlighted in our diversity stats was around the lack of appropriate mentors. In a survey, the two biggest barriers women say they face in the technology workplace are a lack of mentors (48%) and a lack of female role models (42%).

However, we received positive feedback from some of the respondents when asked about their experience with mentors.

“Fortunately for me, I’ve had only good mentors. They have always trusted me, respected my opinion and supported my development.”

“Good mentors have empowered me and trusted me to deliver.”

Despite this, on the negative side, our respondents noted that some mentors didn’t fully support them.

“I’ve had bad experiences of mentors where there’s been no engagement or recognition yet the mentor is happy to take the credit for achievements.”

With 47% of the UK workforce being women, but only 17% of UK IT specialists being female, what advice would our respondents give to women considering embarking on a career in technology?

“I would give any woman the same advice in any industry: do what you love and love what you do, listen to others but make up your own mind, do not take prejudice personally, stick to what you are good at and trust your skills and judgement. Keep learning every day and ensure you, and your team, have fun.”

“Believe in yourself as an equal, try all the different roles and find what works for you. Don’t be intimated by the fact that it’s a male-dominated industry, anything the boys can do girls can do too.”

“For anyone, man or woman, the tech industry is fast-paced, exciting and adding value to business.”

Find out more about how YourPrime Recruitment is supporting organisations with their diversity and recruitment strategies: https://yourprimerecruitment.com/diversity/